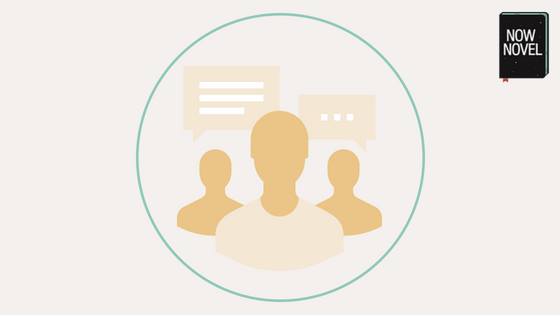 If you search for alternative dialogue tags to use in your story, you’ll find many lists. While some synonyms for ‘said’ read naturally (such as words conveying volume like ‘whispered’), others come across as overwritten and forced, particularly in the wrong context.

Here are 5 simple ways to avoid clunky overuse of ‘he said/she said’:

1. Decide if dialogue tags are necessary

Sometimes we say ‘she said’, ‘he said’ or ‘they said’ when we don’t need to. Just because it’s a writing device commonly used in dialogue doesn’t mean you have to use it. When you get to the end of a line of dialogue, ask yourself:

If you answered ‘yes’ to either of these, you don’t need tags.

For example, you wouldn’t need to use dialogue tags in the following example. The narration beforehand makes it clear who’s speaking, and the details of the characters’ speech give away who says what:

She picked a bit of fluff off her top, looked out the window. He wondered whether he was boring her.

It’s clear from the narration, description and actions who is saying what in the scene. The girls’ actions make it clear she’s the addressee of ‘You seem distracted.’ Her response also gives us a sense of how her date says this.

The stranger the tag, the more colourful and quirky, the more it will stick out in your dialogue.

Ideally, your reader is getting as much clarity from what characters say as they get from howthey say it.

The infographic below (via The Puppet Show) has some good alternatives. Yet it suggests words such as ‘enunciated’ as a synonym for ‘said’. However, if you were to use this tag randomly in the middle of dialogue it would seem arbitrary.

“You seem distracted,” he enunciated.

Because ‘to enunciate’ means ‘to say or pronounce clearly’ it doesn’t completely make sense in this context, since there isn’t a clear reason for the boy to ‘enunciate’.

However, if clarity of speech were relevant to a scene, you could use this word as a tag as it would fit. For example:

“Speak slower.” The speech therapist’s eyes were stern.
“The w-wascal wabbit wan-” he enunciated, wishing each ‘R’ could be clearer.

However, you could achieve a similar effect other ways, too. For example, using ellipses, i.e. punctuation, to show concentration; pauses:

This shows the effort the character is putting in, thus you don’t need a dialogue tag necessarily.

When in doubt, a simple ‘said’ is often enough. Instead of letting different ways to say ‘said’ do heavy lifting, remember this sage advice from Toni Morrison:

‘I never say “She says softly.” If it’s not already soft, you know, I have to leave a lot of space around it so a reader can hear it’s soft.’

3. Use physical gesture and motion instead of ‘said’

Other ways to say ‘she said’ avoid dialogue tags entirely. You may draw attention to the character who has said a line by immediately following speech with that character’s actions.

“No I absolutely will not!” She banged the pitcher of water down on the counter so hard Sarah was surprised the bottom didn’t crack open.

It’s clear from just this line that a female character is in the scene with Sarah, and she’s furious.

The advantages of showing who said what via movement and gesture are:

4. Use ways to say ‘said’ that add atmosphere

Using gestures and actions such as the following, as outlined above, helps to lend character and emotion to dialogue:

Also think about ways to say said that convey volume and tone, i.e. atmosphere. Although Toni Morrison’s advice above is good (creating quietness using the spaces around characters’ lines), the occasional ‘she whispered’ has its place, too.

Synonyms for said that show volume include:

The above words remind us that tags that indicate volume and tone are typically reserved for extremes – of tension, emotion or environment. A kid protagonist might whisper in a creepy graveyard, a pranked neighbour might ‘bellow’ in pure outrage. Yet these are suitable tags for climactic moments. Make characters bellow or whisper every other line and the device loses its effect.

5. Switch to a narrator or other character’s reaction

Because dialogue is relational, an exchange between two or more characters, it also works to switch to another character’s reaction instead of focusing on the character who’s just finished speaking.

“You wouldn’t believe what happened next. I was-”
“John, can we pause this for a second, I really need the bathroom.”
When I returned, I couldn’t believe he was still going. Something about what not to do in an avalanche. As if he were the only one at the party who’d ever had any adventures.

Here, because the second character addresses John by name, we know who’s been speaking. Because of their interruption, as well as their shock that John is still speaking when they return, we also get a sense of how John speaks. It’s a one-way street, John holding the floor (and holding his listeners ransom).

As you can see from the above, there are many ways to show who is speaking in dialogue. Other ways to say said can avoid dialogue tags entirely. Use gesture, movement or reaction to show your reader details of character and setting.

Need help improving your dialogue? Get help with everything from formatting to context when you enroll in our four-week writing course, ‘How to Write Dialogue’. Or join Now Novel for constructive feedback on your writing and help brainstorming ideas.

Filed under Advice and tips for writers, General post, Re-blogged

3 responses to “421 ways to say said? Simplify dialogue instead… Courtesy of NOW NOVEL”

This site uses Akismet to reduce spam. Learn how your comment data is processed.

Independent Publisher of Poetry and Prose

There are dragons and magic in the world if only you look for them... V.M. Sang

In Aw
Scrambled, Not Fried

Healing CPTSD with Poetry and Photography

-Reviews, Advice & News For All Things Tech and Gadget Related-

Some Things Real and Some Imaginings
The Cheesesellers Wife

Anything and Everything, but mostly Poetry

Driveling twaddle by an old flapdoodle.

The Pen and the Plough
Wandering Will
like mercury colliding...

The Writer Next Door | Vashti Q

Where the fire and the rose are one

the magic begins the moment you start being yourself

a resource for moving poetry

Musings from an insignificant writer

A community with environmental and healthy resources

An Independent Non-Discriminatory Platform With No Religious, Political, Financial, or Social Affiliations